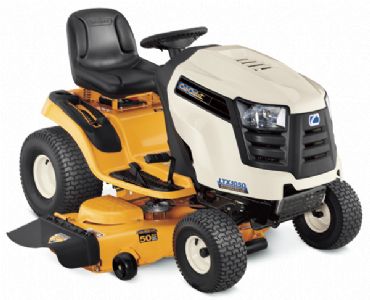 For mowers that blur the line between professional usage and utility around the typical home, consumers need only look to the LTX series of riding mowers sold by Cub Cadet. While many models within the series start out as perfectly regular mowers for homeowners, their power and performance quickly escalates to professional-grade in no time. That's definitely the case with the LTX 1050, which features a powerful engine and an automatic transmission that will appeal to people across the landscaping spectrum.

Ample Horsepower for Lawns of All Types and Sizes

Most riding mowers that cater directly to homeowners come with a single-cylinder engine that can handle the "average" lawn. In fact, many Cub Cadet mowers come with a single-cylinder Kohler engine for just this purpose. The LTX 1050, however, is a special kind of mower that has been specifically designed to resonate both with homeowners and those in the landscaping industry. To that end, it features a v-twin engine that packs a powerful punch.

Cub Cadet switches out the Kohler single-cylinder engine for a Kawasaki v-twin OHV model. The difference in power is actually quite notable, with the Kawasaki engine able to produce an impressive 23 horsepower during typical mowing jobs. That gives the mower an edge when it comes to tackling uneven terrain and less traditional lawns that might require a bit of an extra push.

The LTX 1050 is also one of Cub Cadet's only consumer-targeted mowers to feature the Automatic Tuff Torq hydrostatic transmission system. This unique transmission allows for a far smoother ride than virtually any other mower on the market, and that's good news for operator fatigue during particularly long mowing jobs.

With just the features mentioned above, this particular model would be a top choice for a large number of buyers. Cub Cadet goes a few steps further, though, bundling the mower with a 12-inch turning radius that is among the tightest in its class. A top forward speed of 5.2 miles per hour gives the mower an added speed advantage, as does its reverse speed of more than two miles per hour.

For good measure, Cub Cadet has included vehicle-like safety and maintenance indicators that cover everything from fluid changes to battery levels. This peace of mind will be refreshing to many buyers. With access to a nationwide network of dealers like Shank's Lawn Equipment, buyers can rest assured that any maintenance or service they require will be backed up by quick access to parts diagrams and OEM replacement options that will maintain the same high level of Cub Cadet quality.