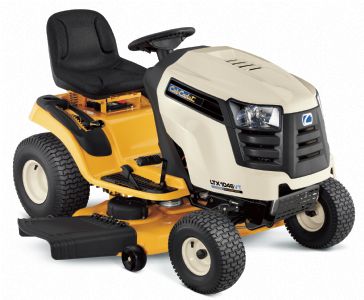 With each model of the popular LTX series of riding mowers, Cub Cadet slightly increases the specs and the mower's attractiveness for homeowners. That’s certainly the case with the LTX 1046, which offers a few notable improvements from lower-end models in this series of mowers. With a different engine, a heavier weight and seriously high-end mower deck features, the LTX 1046 is targeted to pseudo-professional homeowners who refuse to compromise when it comes to mowing precision and power in their larger, more even lawn.

With Help from Kawasaki, the LTX 1046 Really Takes Off

Most of the riding mowers sold as part of the LTX line come with engines that are produced by Kohler. Those engines are single-cylinder models that are more than capable of powering through even the most demanding tasks, but they do suffer from a few key limitations due to their lower overall power rating and smaller size. The LTX 1046 seeks to address this concern with homeowners who simply require more power from their riding mower by offering a v-twin engine instead.

The v-twin OHV engine included with the LTX 1046 notable breaks from the company's practice of including Kohler engines, instead being manufactured by Kawasaki. This upgraded engine can produce an impressive 21.5 horsepower, making it a great deal more powerful than the lower-end Kohler engine found on the LTX 1045 and other models. The engine works in tandem with manual, sector-and-pinion steering and a hydrostatic transmission to offer fast speeds and the ultimate in high-end lawn care.

Careful Maintenance of Even the Toughest Lawns

The LTX 1046 is equipped to handle even the toughest lawns that homeowners might face, largely because of its hefty weight that easily exceeds 500 pounds. Also key to its functionality for homeowners is the 12-inch turning radius that easily outdoes both lower-end LTX models and many other riding mowers made by Cub Cadet and its nearest competitors. That tight radius allows for a narrow, turf-like appearance to the lawn and will likely make it the envy of the neighborhood.

A system monitoring package is included with the LTX 1046, just as it is with many models in this series. That package indicates battery level meters, oil change meters and a number of other indicators that allow for quick, timely and effective mower maintenance.

The LTX 1046 can easily do double duty as a homeowner's riding mower and a professional's equipment. Its powerful engine, solid construction and built-in safety features make it a great buy for anyone with demands for big horsepower and precise cutting.