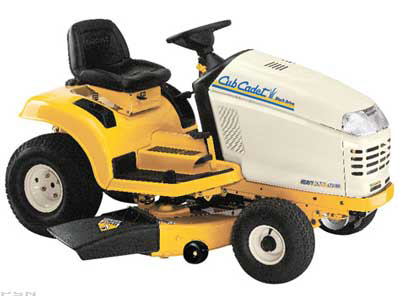 With its Kohler Command engine and triple-blade cutting architecture, the Cub Cadet Lt 2042 represents one of the highest-end riding mowers for homeowners who are serious about creating a professional-looking lawn each time they mow. Cub Cadet has long been dedicated to combining the largest amount of power and the best consumer-friendly form factor, and that can be seen in the compact size of the LT 2042 when compared with competing models from other manufacturers. Without a doubt, this mower is a serious contender for amateur landscapers and those homeowners with a large amount of land to conquer each time they mow.

A Seriously Powerful Engine Under the "Hood"

The LT 2042 model is set apart from the LT 1000 series of home riding mower sold by Cub Cadet largely because of its engine. Unlike models targeted to more entry-level consumers, the LT 2042 comes with a two-cylinder Kohler Command engine. This engine is even more powerful than the v-twin models found in some LT 1000 series alternatives, and it's certainly more powerful than Cub Cadet's entry-level models that feature a single-cylinder engine.

Behind the power of this engine is a heavy-duty transmission that keeps the mower moving smoothly throughout even the toughest jobs. Even at the highest rates of speed, which max out at about 5 miles per hour, the mower manages to remain smooth and easy to handle. The transmission's easy operation and the engine's power allow for the LT 2042 to make sharp, 18-inch turns.

Three blades are stacked within the medium-sized mower deck bundled with the LT 2042, allowing it to cut grass as short as two inches. For those who like a longer cut, the mower can raise its blades high enough for a 4-inch mowing job. It should be noted that the LT 2042's triple-blade layout is quite different from the 1000 series, where single or dual blades are the norm.

Beyond the Engine: Great Service, Support, and Availability of Parts

The LT 2042 comes with a number of indicators that will alert owners to low oil, low fuel, or the need for an oil change. In addition to these helpful indicators, the Cub Cadet model comes paired with access to a large number of OEM replacement parts. That makes it easy to keep the mower in good repair throughout the year, or find the right parts to service a malfunctioning element within the mower itself.