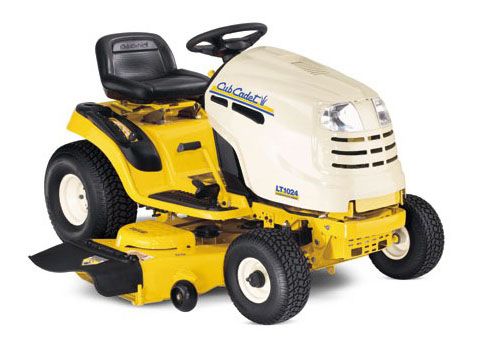 In designing the consumer-friendly 1000 series of riding lawn mowers, it was Cub Cadet's goal to create a line of lawn mowers that were almost universally powerful, lightweight, and a joy to ride. It has done that with each model in this series, including the enjoyable LT 1024. The model is one of the most popular among homeowners who want a moderately powerful mower for a medium-sized lawn. It's fast, light, and a breeze to repair or maintain, further enhancing its selling points among its targeted demographic.

Fast, Powerful, and a Smooth Ride: The Deciding Factors

With a 50-inch mower deck, this model is no joke when it comes to handling medium-sized lawns and even some larger lawns at homes around the country. This relatively large deck for a consumer riding mower is backed up by a powerful Briggs & Stratton engine, which any serious Cub Cadet shopper will recognize as one of the most trusted names in power equipment machinery.

A smooth, heavy-duty hydrostatic transmission is featured on the LT 1024, as it is on every LT 1000 series riding mower sold by Cub Cadet to homeowners. This smooth transmission makes the ride much more enjoyable than competing models, and it helps the mower achieve a forward speed of over five miles per hour. In reverse, the mower can go up to 2.3 miles per hour. Neither forward nor reverse movement is subject to a jolty ride or choppy shifting, which is refreshing in the consumer space.

Good Fuel Economy and a Moderate Weight for Its Class

The LT 1024 certainly isn't the lightest riding mower on the market, though Cub Cadet does offer a much lighter model at the entry-level of this series. Instead, the mower comes in somewhere around the middle of the consumer class, at 190 pounds. That allows the mower to still achieve good speeds, while not detracting very much from its fuel economy. All told, the Cub Cadet LT 1024 is focused more on power and speed than on fuel economy, so consumers should consider its lighter weight an added bonus at the pump.

The do-it-yourself home landscaper will appreciate the LT 1024 from Cub Cadet, largely for its greater amount of power and lightweight construction. The wide availability of OEM parts from Cub Cadet is another selling feature, as is the ability to view parts diagrams online when shopping for replacements or the tools needed for regular maintenance. For the best combination of power, efficiency, and do-it-yourself operation, this model is a winner for many home purchasers.